Tom Lavis, a writer for the Tribune Democrat, wrote an article titled “Feisty nonagenarian helped build solid company” on July 21, 2003. This article will forever be a perfect description of who we are here at Fi-Hoff Concrete. 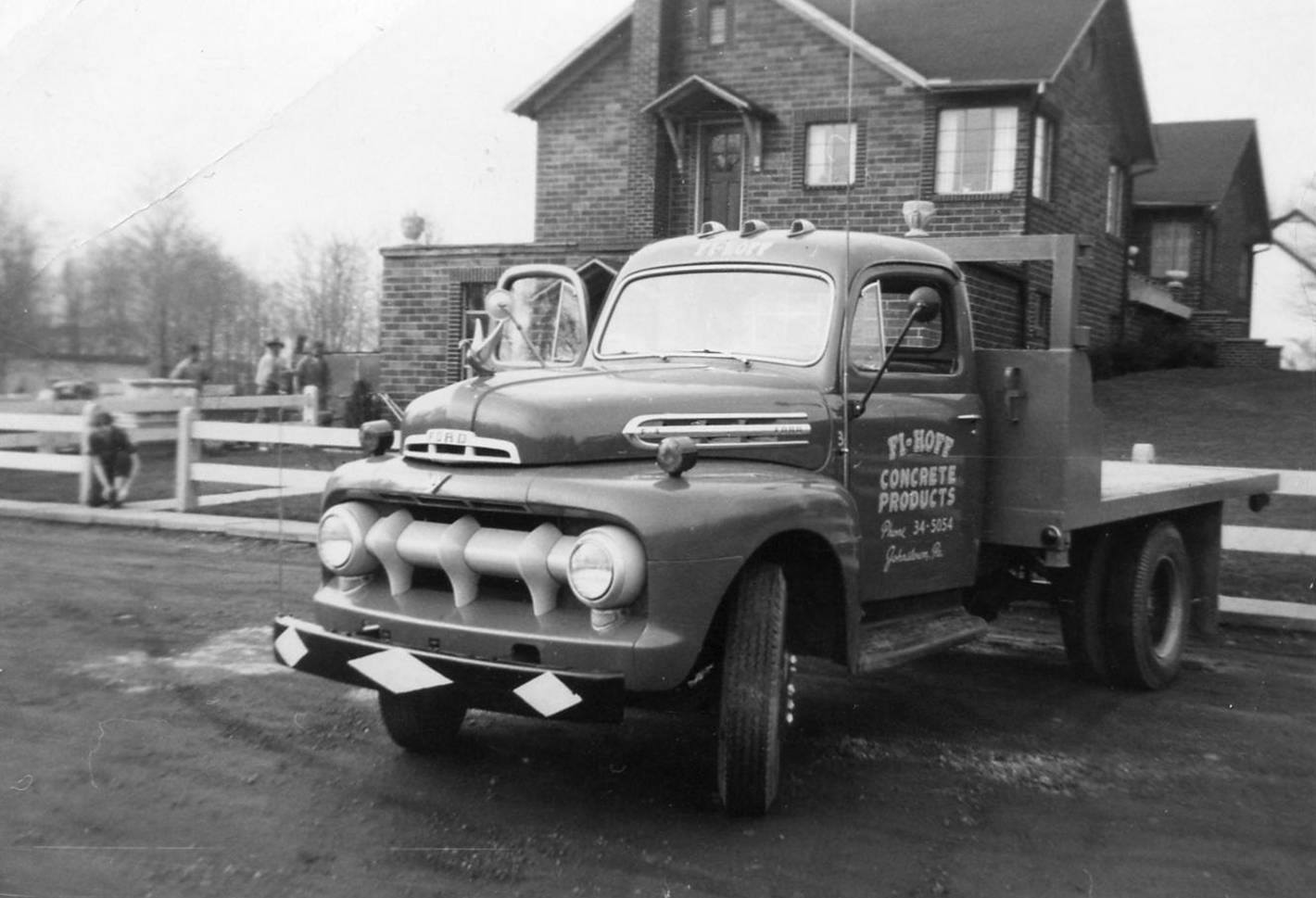 When Leora Fike met Carl Hoffman on a blind date in 1928, she never imagined that it would be the foundation of a concrete relationship.

She was a nursing student at Conemaugh School of Nursing on Franklin Street in Johnstown, so the young couple walked to Luebies Confectionery, which was just down the block, to have an ice cream soda.

“I didn’t want to go too far away because I didn’t know what to expect.” Said the woman who would late marry Hoffman and found Fi-Hoff Concrete Products, the long established, family-owned Johnstown area business.

“He borrowed a car from his boss, Jay Kissell, who owned Kissell Concrete Block Co. in Hornerstown, and we went out for a drive.”

Mischievously, I asked her if they went parking.

She looked me straight in the eye, said, “If we did, I wouldn’t tell you” and erupted into laughter.

Mrs. Hoffman, a well-groomed woman who stands about 5 feet 2 inches, exhibits an endearing sense of humor and a can-do attitude.

Looking back, she is proud of what she and her late husband created, now boating four generations of Hoffman’s in the business.

The late Mr. Hoffman was affectionately known as “Huffy,” and the couple took Fi-Hoff from a small enterprise started in Meyersdale garage to one of the most reliable concrete suppliers in the region.

“We started the business with my brothers, Hank” she said. “They made precast walk slabs using a hand mixer. It was a crude affair.”

They absolutely loved doing it!

While most people would balk at tackling cement work, Mrs. Hoffman said her husband and brother relished it. “They absolutely loved doing it,” she said.

The Hoffman’s moved their half of the business to the Johnstown area a year later because work was sparse in southern Somerset County.

That was 1947, and Mrs. Hoffman described it as the perfect time to be in the building supply business. Veterans returning home from World War II demanded housing and construction was robust.

“There was a building boom everywhere,” she said “we couldn’t have started at a better time.”

The business was located in Dale, not far from the couple’s home at the time.

It quickly outgrew the location and in 1949 was moved to the existing site at 240 Bentwood Avenue in Geistown.

With all the residential and commercial construction, septic tanks were in great demand, and the Hoffman’s were more than happy to supply the region.

“We delivered everywhere, including Ligonier and Latrobe,” she said.

Until last month, Mrs. Hoffman alone in her spacious Alum Bank home. She has come to live with her daughter and son-in-law, Sally and Don Parkins, in the Oakland section of Johnstown after some eye surgery.

When I learned that her Alum Bank home was a five bedrooms and five bathrooms, I inquired who cleaned the home.

She quickly snapped, “Who do you think?”

That’s not surprising for a woman who learned to drive at age 66.

Mrs. Hoffman’s son, Van, 69, who retired as president of the business in 1999, said growing up in a family business was interesting.

Mr. Hoffman regrets that his father didn’t live long after his retirement to enjoy the fruits of his labor.

The Alum Bank home is home is a refurbished summer cottage that the couple spent years rebuilding.

“My dad retired at age 67 and died of a heart attack not long after he drove the last nail into the completed house,” Mr. Hoffman said.

Not long after her husband’s death, Mrs. Hoffman faced a health crisis of her own.

“She went into the hospital and was diagnosed with cirrhosis,” said Mr. Hoffman. “She never drank a day in her life. We were told to make arrangements at a funeral home because she would not live out the week. That was more than 20 years ago. “I would say she bounced back.”

After decades of bookkeeping, Mrs. Hoffman still balances her own checkbook without using a calculator.

Mrs. Hoffman retired in 1975 at the age of 65, but she still enjoys going to the business to see the workers, who she regards as friends.

“My husband was a stickler for providing the best product, and we threw out more than one batch that didn’t meet his specifications,” she said. “That same attitude continues today.”

...a stickler for providing the best product...

Fi-Hoff has 21 cement mixers plus a variety of other trucks in its fleet.

Mrs. Hoffman said that purchase and the way the business has grown makes her proud and she knows her husband would be gratified.

“We poured the large concrete cross at Richland Cemetery and it is in direct line with my husband’s grave,” Mrs. Hoffman said. “That seems fitting.”